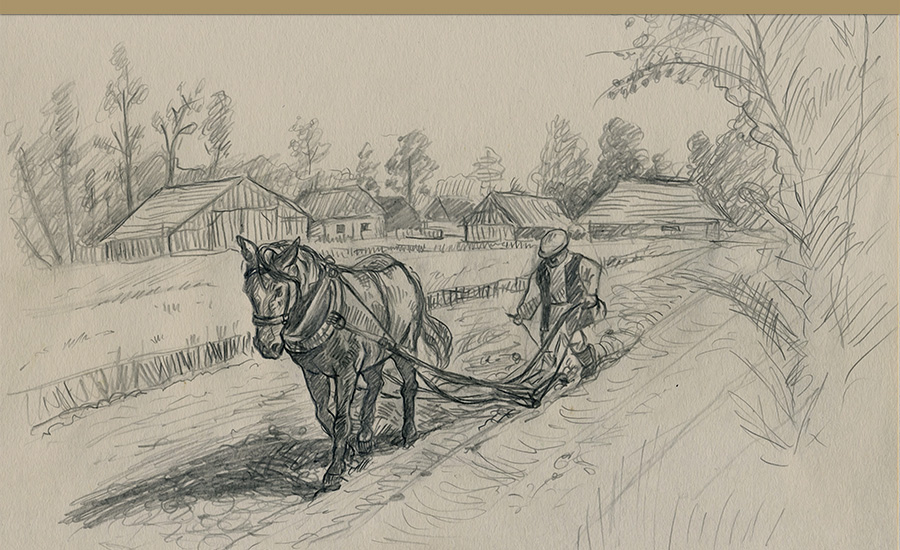 In the 16th century, the village consisted of two parts – a proper settlement and the manor. The settlement was inhabited by people distinguished by their social status: Kmiecie, Zagrodnicy, Komornicy and Chałupnicy.

In the 1536 year, Będziemyśl was inhabited by 24 peasants with the status Kmiecie, they settled arable fields of different sizes. They paid rent for the land: 13 grzywna, 12 grosze, 17 bushels of oats, and tributes in the form of roosters, cheese, and eggs. The inn paid 4 fines and one “stone” (about 13 kilograms) of tallow and 4 quarts (about 1.1 liters) of honey. 5 peasants from the status-group Zagrodnicy served to the manor. Total houses 32.

At that time, the village of Klęczany was inhabited by 4 Kmiecie with arable fields of different sizes. They paid a rent of 1 grzywna and 4 grosze. They worked for the manor in Będziemyśl. The village of Księżymost was inhabited by 7 Kmiecie, supplying 4 quarts of honey and labor to the manor in Będziemyśl. These four mentioned villages were owned by Marcin Sopiechowski, and their value was estimated at 2100 grzywna. In 1536 in the town of Sędziszów were 99 houses, 4 butcheries, a bathhouse, 2 mills, and a manor house. In 1662 there were already 299 houses.

In the 1581 year Będziemyśl, Klęczany and Księżomost belonged to Katarzyna Sopiechowska. At that time in Będziemyśl, there were 24 peasants with the status Kmiecie. All of them were settled on the 7 łan of land (1 łan – mostly around 24 hectares). 8 peasants with a land and 1 without the land in the group of Zagrodnicy. 10 inhabitants in the group of Komornicy, 2 poor inhabitants, 2 craftsmen, 1 musician, and 1 innkeeper settled on half of łan. Total 49 houses, not including the manor house. Klęczany was inhabited by 4 Kmiecie, 5 Zagrodnicy with a land, 1 craftsman, 3 poor inhabitants and 1 innkeeper settled on a quarter of the łan.

The former population in these villages, as in the whole of the Kingdom of Poland, was divided into 4 groups.

The second group was called Zagrodnicy (latin – Hortulanus), who owned homesteads and gardens covering 2 morga (about 1 hectare) of field, on the opposite side of the road. To this day, people still call these fields – “zapłociemi” or “za płotami” (behind the fences). These homesteads were intended for craftsmen, like shoemakers, blacksmiths, and even innkeepers.

The third group is so-called Chałupnicy (latin – Vicinus) – they had no land to cultivate and lived in their own houses located on the land of village’s owner.

The four group was Komornicy (latin – Inquilinus), they lived in the so-called “komornem” (payment for renting a room), which means they didn’t have their own houses.

There were also two separate fields in the villages, designated for a common pasture, commonly called “skotnia”, “skotnica” and “wygon”. The income from these fields had the village mayor.

Such social classes of the rural population was important in the times of serfdom. It obliged peasants to do their feudal work a certain number of days a week to the owner on whose lands they were settled. It was a kind of payment, not with money, but with labor in the property of the village owner and tributes in a fixed number of poultry, eggs, or flax. In the era of the Piast dynasty, when there were no manors, there was no feudal service either. Only later, the creation of manor farms created feudal service, i.e. permanent and forced labor. It was smaller in Church and Royal estates and heavier in Noble estates. The abolition of feudal service in the 19th century was mainly contributed by the landowners. The Austrian government abolished these feudal services with a patent from 1848 year.

The feudal service for Kmiecie and Zagrodnicy was from 2 to 4 days a week (comment: it was calculated from the area of land leased by a peasant. The work of one person. Family of a few people could do this work in one day. The remaining weekdays, the family spent on the work in own farm). Kmiecie worked out “ciągła” (pulling) labor with draft animals. Zagrodnicy worked in “piesza” labor (in the old meaning – ordinary work). On the other days, they worked at Kmiecie’s farms. The payment for their work was food and lending the part of field to grow flax and potatoes. In Będziemyśl and Klęczany it was usually 2 days of work in the summer, for one “zagon” of field. In the families with Kmiecie status, the father’s estate was taken over by his eldest son, which paid off his younger siblings.

The feudal service was hard and sometimes handling with people was inhuman. The manor’s administrator didn’t avoid flogging for a minor mistake. In the 1792 year in Będziemyśl, died Teresa – 34 years old wife of Jan Wilczyński. The reason was a strong beating at the manor.

According to 1773 tax register from Będziemyśl – the “ciągła” work of all residents amounted to a total of 2184 days, “piesza” 2314 days. Besides that, there were 204 days of “szarwark” (work on repairing roads and bridges).