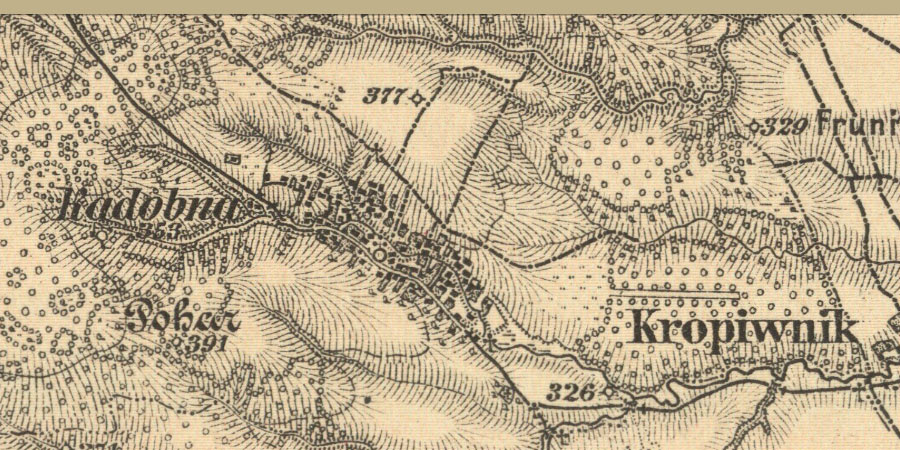 Kadobna village is inhabited by 1027 people (172 house numbers). The village is located to the west of the town of Kalusz (Kalush) and to the north of Holyn, where there is a railway station and post office. On both sides of the village there are 217 morga (morga = about 1.4 acres) of pastures, and almost the entire village is surrounded by forests and meadows. A stream flows through the middle of the village.

The historical message is that several dozen people from the Stanislawow area [Ivano-Frankivsk today] settled here. They escaped the Tatars invasion.

3. Description of the Church and its monuments. When it was founded, built and consecrated, where it is located ?

The Church Acts begin with 1836, written in Old Church Slavonic language, then in Latin since Galicia was taken over by Austria.

6. Do you have any information about historical events, such as Tatar attacks, battles, robberies, thugs and so on ?

Hair color    Dark
Facial complexion  ”Healthy”
Growth   “Adequate”
Physique   “Quite strong”
Endurance at work   Low
Temperament  Choleric
Healthiness   Average the health, despite the favorable forest environment
Morality  It’s thanks to the present parish priest – Rev. Konstantyn Czepiel, that the residents of Kadoba and Kropiwnik don’t drink vodka or rum. Only a few people are an exception in both villages. Thus, the morality in these villages is relatively better compared to other places.

The women’s outfit is ordinary. On holidays, they put on thin “rantuch” (headscarf) on their heads. They fall on their backs and are long up to their ankles. In winter, they wear sheepskin coats covered with black cloth.

A special kind of faith in fortune-tellers and quacks, who are generously paid by the inhabitants during their illness. Belief in “bells” to protect against hailstorms has been preserved. In the summer, when any cloud appears in the sky, they ring the bells out loud. Two people work as bell ringers and they charge “garniec” (the pot) of grain (3.8 liters – approx. US dry gallon) from each farm and a small cash payment.

The inhabitants breed cattle, which they then sell at the market in Kalusz (Kalush) and Rozniatow (Rozhnyativ) in Dolina County. They are also involved in beekeeping. The beekeeping economy has not developed, so they do not have much benefit from it.

Working in the state forests and transporting trees.

14. How many people were deceased and newborn in the village in 1892?

Additional informations:
The school was built in 1857. 127 children are obliged to attend the school, but 131 are currently studying. Some of them still attend school after the end of school age, so there is such a difference in numbers. In the state forest called “Na Klubokiem”, half a mile from the village, there was a saltworks, which was later closed.