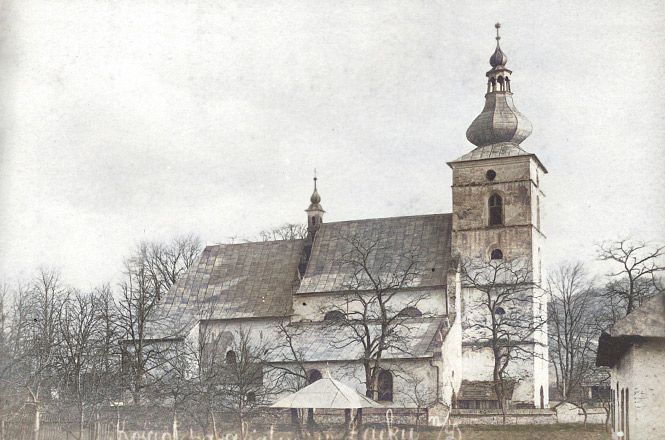 FOLK COSTUMES IN THE PARISH OF LACKO IN NOWY SACZ COUNTY

The Łącko Parish stretches over the Dunajec River on the ethnic border of the Lachs and the Gorals. Hence the costume of the local people takes over the properties of both. The Lachs from the side of the town of Sącz call Łącko parishioners as „the Gorals”, while the Gorals from the side of Nowy Targ call them „the Lachs”. Nowadays, the local costume is more similar to the Lachs’s costume – in cut and embroidered decoration, but this is slowly changing and it will not be similar to today’s one in a few years. So, I think it is advisable to describe it in the magazine „Lud” (The People)

The men’s casual wear during the summer is as follows. „Płócianki” – the trousers made of „zgrzebne” canvas (the thickest of hemp and linen fibers) or of „paceśne” canvas (slightly thinner) produced by local people. These trousers are wide and long to the ankles. It takes 1.8 meters of canvas to sew them. A shirt made of the same canvas as „płócianki” trousers, but thinner. A shirt is long and reaches above the knees; has a lined collar; without embroidery; completely white; fastened under the neck and on the breast with buttons made by local seamstresses from threads. Buttons made of tin or bones are bought in the stores. Every housewife can sew a shirt and „płócianki”. A shirt requires 2.5-3 meters of canvas. A shirt is girded with a leather strap, 3-6 centimeters wide, and fastened with a brass buckle. Sometimes, the strap is decorated with caps and brass buttons. Older men wear straps that are enough for a single wrap. The young and bachelors wear such straps that they are wrapped 2-3 or even 4 times. The second, third, and fourth wrap loosely. They buy these straps at the fair in Łącko, made by saddlers from Stary Sącz at a price from 30 Hellers to 2 Krones and more. Some men wear low-quality vests on the shirt, which they buy at the fair in Łącko from Jews from Nowy Sącz. In the past, instead of vests, they wore so-called „Lajbiki” made from homemade cloth, embroidered with colorful strings and decorated with brass buttons. The shirts on the chest were fastened with a brass clip, which was in various shapes. The shirt under the neck was fastened with a colored ribbon. Older men wore „srosy” instead of today’s straps.

The „kyrpce” (kierpce – a kind of moccasins) are used as a daily shoes, which they make from thick leather, bought at the fair for 1.60 – 2.50 Krones. The feet are wrapped in a white cloth, which they wrap around with a 1 to 2-meter long thong. When the „kyrpce” are damaged, every man can repair them with a leather patch. They also walk barefoot.

They wear hats decorated with chains or cube beads. The brim of the hat falling down. In the past, they used „mottled” decoration. They call such hats as „góralskie” (highlanders). The value between 1 – 2 Krones. In addition, they wear hats in „Lachs” style with rolled up brim. In the past, they were wearing hats decorated with cock and peacock feathers. 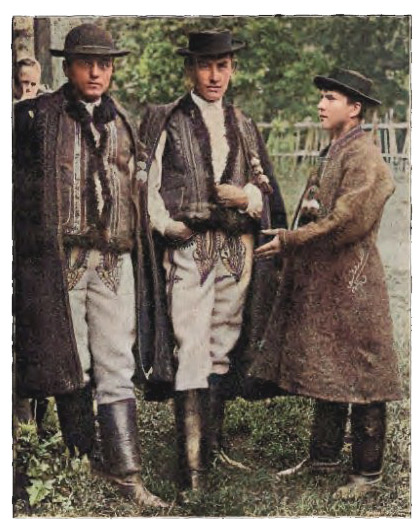 Men’s outerwear is „gurmana” (coat), made from brown cloth. In the past, they were wearing similar „gurmana” but less embroidered and decorated with brass buttons, which were made by tailors. 2 meters of cloth are needed to sew this coat and may cost 8-15 Guldens [the currency in Galicia until 1892 year. The value of 1 Gulden was set at 2 Krones].

On Sundays and holidays they wear a shirt made of thinner canvas of their own production, the „płócianki” (linen trousers) are also made of thinner canvas. They used to be worn together with the „cyrka” (kind of hemstitch) at the bottom. Additionally, they put a vest, formerly „Lajbik” bought at the fair. They wear „gurmana” in a new style or richer embroidered. Hat also in the new style. The richer ones wear Polish shoes with uppers. The bachelors decorate the uppers with patterns depicting stars, crosses, rings, etc. Shoes are made by local cobblers, priced from 10 to 16 Krones. Poorer men wear the „kyrpce”, also during holidays.

In winter, the special white trousers are put on „płócianki”, decorated with string and red and blue embroidery. They are sewn by local tailors at a price from 1.60 to 3.00 Krones per pair. Ready-made winter trousers cost 6-10 Krones. During this period, instead of a vest, they wear a short yellow sheepskin coat. It is called „serdacek” and costs up to 10 Krones. Local furriers sew it. They put caps on the head, which are made by local furriers. The cap costs up to 4 Krones. The sides of the cap are made from black sheepskin and the top is made of black cloth. Inside is a black tassel made of silk or cotton thread. Their outerwear is white or yellow sheepskin coat, which is in the shape and length of a „gurmana”. The farmhands wear knee-length sheepskin coats during work, which are usually white. On Sundays they wear long coats, usually yellow. Poor people wear „gurmana” in winter. The Christmas coat costs between 30 – 40 Krones. They wear the so-called „kapcie” in the winter season – a type of socks made of cloth or woolen thread.

Shirts are made of linen, half linen, or hemp. They can be sewn by every housewife. The shirt is divided into two parts: the right shirt to the waist and „nadołek” (bottom part) from the waist to the knee. The „nadołek” is usually made of thicker canvas. They sew so-called „kryski” (a ruff) to the collar, made with crochet, embroidered with red and blue cotton in the form of leaves and dots. However, the „kryski” are recently learned in the school. Women used to wear classic collars, without embroidery and „kryski”, tied with a red ribbon. The ends of the sleeves are narrow, fastened as in men’s shirts.

They wear two skirts: „barchetka” – a warm skirt made of barragon (light corded cotton) on the bottom and so-called „farbówka” on the top in various colors – usually navy blue with dots or white stripes. Each skirt consists of 5-6 parts of fabric. They put „zapaski” (aprons) on the skirt, usually pink with stripes and navy blue.

They wear headscarves. In the winter – „tybet” headscarves (made of Tibetan fabric) in various colors. They cost from 1.60 to 2.80 Krones. In the summer – calico headscarves at the price of several Hellers. They are tied up under the neck.

In the summer, they put „wizytki” on the shirts – a kind of cropped jackets, not matching the figure, which are made of canvas in different colors. Underneath, they wear much used corsets. The neck is adorned with „pacierze” (glass beads), which they buy at the fair for a few dozen cents.

That’s how they walk around the house. When go out the house, they wear body scarves. Thinner in summer and thicker in winter. Scarves dressed for church visits for a long time, they start to wear on weekdays. In summer, women and girls walk mostly barefoot. In winter, they walk in „kyrpce”. Housewives wear shoes or „trzewiki” (lace-up boots). In winter, they also wear short sheepskin coats, just like men. 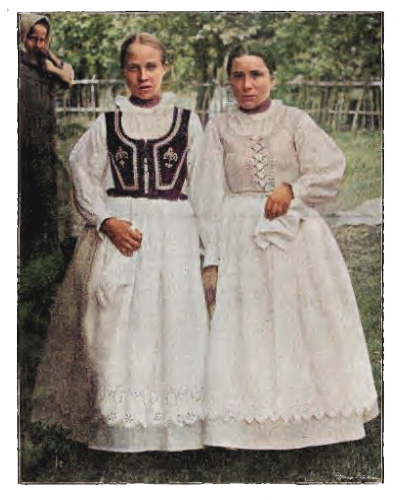 On Sundays and holidays, women and girls wear calico or linen shirts with „kryski”. Calico and linen skirts in various colors, which they wear from 2 to 5 pieces. On it they put „fartuch” (white skirt) – embroidered at the bottom or decorated with crochet mesh. The „fartuch” is usually white, made of calico fabric. The whole covers white „zapaska” (apron), made of calico fabric, embroidered at the bottom, sometimes with a cream mesh sewn all around, bought at the fair.

Girls wear black velvet corsets in the summer, embroidered with plates and beads. These corsets are sewn by local seamstresses. Girls wear light body scarves in a variety of colors that fold into a cross. The richer ones wear „tybet” scarves, which cost between 10 – 14 Krones. „Rypsowe” scarves cost 12 Krones. Winter scarves cost 10 – 25 Krones. In winter they wear woolen „katanki” (jackets) with or without pockets, in black color, made of velvet or cashmere, and fastened with black ribbons and buttons.

Married women wear a coif scarves, that ties one another on their heads. Coif scarves are: tulle, muslin, bengal, and calico embroidered. Each housewife has several such scarves. In the summer, the girls walk with their heads uncovered with hair braided, decorated with flowers. In the winter, they wear headscarves. Rich housewives and their daughters wear real beads on their necks – worth several dozen Krones. They wear shoes with uppers or „trzewiki” (lace-up boots).

The old costume of married women was different from today’s one. On their heads they wore colorful coif scarves, when today they wear only white or tied from scarf called „turecka” (Turkish) – made of calico, decorated with flowers in dark red and dark green. Older married women also wore coif scarves on weekdays.

After the wedding, the married woman cut her hair to the height of her ears and wore such a hairstyle all her life. This custom is abandoned today. Until recently, the girls had hairstyles called „loki” and „icki”. „Loki” – the hair above the forehead slightly curled up at the end with a spring. „Icki” – falls freely, evenly cut.

Married women used to wear „sukienki”. It was clothing made of black cloth, with sleeves, knee-length with a cape. The cape and bottom of the dress were trimmed with silver stripes. Also, they wore „kaftany” (caftans) of navy blue cloth. Instead of today’s large body scarves, they wore „rańtuch” (wide and long headscarf) – white, calico, embroidered, or without embroidery.

Boys up to 7 years old wear thicker or thinner shirts, long below the knees, belted or without a belt. Boys of richer parents wear „majtki” – made of poor quality fabrics. It is a whole uniform clothing fastened at the back. Girls wear dresses with bras or skirts and caftans, and their heads are clothed with headscarves, that tie at the neck.